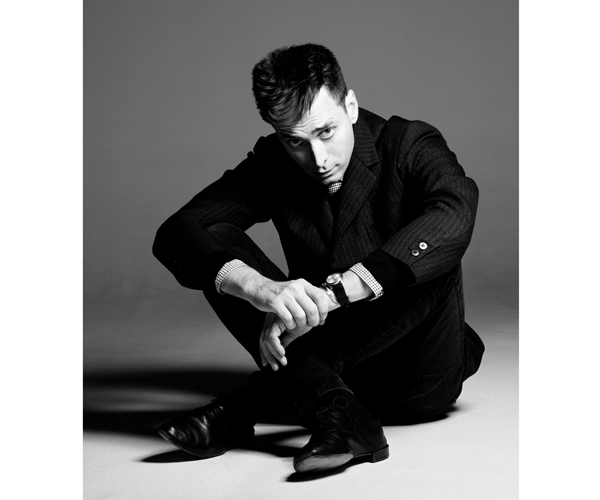 Hedi Slimane could write a book on how to lose friends and still influence people.

It has been a year since Mr. Slimane, who made his name designing skinny suits for skinny men more than a decade ago, took over as the creative director of Yves Saint Laurent, in what has proved to be the most contentious undertaking of a brand reinvention in recent memory. Every week there is a new uproar, from spats with critics to the relocation of his studio.

The latest, though hardly the biggest, is a series of advertisements in which Mr. Slimane has cast unwholesome rock stars like Courtney Love and Marilyn Manson to represent what was once the most revered fashion house in Paris, synonymous with Catherine Deneuve and Betty Catroux. One image shows Ms. Love, in a spotted fur coat, crawling on the floor. Another is a close-up of Mr. Manson’s brooding face opposite the new name Mr. Slimane has put on the label, “Saint Laurent Paris.”

“Hedi wants to shock,” said Pierre Bergé, the former partner of Mr. Saint Laurent and Mr. Slimane’s biggest champion. Dismissing the criticism that has shadowed the designer’s every move, Mr. Bergé, who no longer has a financial stake in the company but has been front and center for both of Mr. Slimane’s women’s shows, described him as the one true heir to the legacy of Saint Laurent. It is a house, he noted, that has long thrived on creating great controversy, as well as great fashion.

“When you are an artist,” Mr. Bergé said, “you are obliged to shock.”

This, more than anything, Mr. Slimane has done well.

Since he replaced the designer Stefano Pilati in a creative takeover that bordered on a coup, Mr. Slimane, 44, has introduced a vision for Saint Laurent that has been so divisive among critics and retailers that no one can quite be sure whether, in hindsight, it will be seen as brilliant or absurd. Reviews of his first two women’s collections, luxe boho and floppy hats for spring and baby-doll grunge dresses for fall, have ranged from the underwhelming to the scathing. Meanwhile, much of the news coverage about the designer, an elusive figure at best, has centered on his antagonistic relations with newspaper critics and magazine editors, banning some journalists from the shows and challenging the tone of coverage.

Yet store buyers have fallen all over themselves to be the first to stock Mr. Slimane’s designs, which they say have been selling briskly this spring, despite some problems with deliveries.

“We would have liked to have had it sooner,” said one retail chief, who declined to be named because Saint Laurent is a potentially lucrative business.

In assessing whether his first year has been a success, there is little doubt that people are talking about Saint Laurent, even without the participation of Mr. Slimane in the conversation. Since joining the company, he has taken a provocative stance against the fashion system. He has made few comments to reporters, only to acknowledge that his ideas are indeed rooted in music and to rebut criticism that he was being disrespectful when he dropped the word “Yves” from the label, one of his first moves that gave offense.

The new logo and its modified Helvetica font were inspired by the storefront of Mr. Saint Laurent’s ready-to-wear business in the 1960s, called Saint Laurent Rive Gauche. But mostly, his intentions have been anyone’s guess, resulting in passionate debates both for and against Mr. Slimane’s rock-chic sensibility. He declined to be interviewed for this article.

“What is interesting to me is how extreme the reactions are,” said Dirk Standen, the editor in chief of Style.com, which has monitored its readers’ reactions to the show through their online comments. “They are fairly evenly split,” he said, “though possibly slightly more negative than positive. At the end of the day, they are clothes. People could just shrug.”

In a sign of the interest in Mr. Slimane’s shows, Saint Laurent ranked second among the most viewed collections on the site for both the fall and spring seasons, with more than 2.2 million page views for fall, right after Chanel. Before Mr. Slimane, the collection had not previously been in the top 10.

Barneys New York had sold 60 percent of its spring order at full price as of last week, including a $14,000 dress. Jeffrey New York also sold out of several key looks.

“When we were buying the collection,” said Jeffrey Kalinsky, the store’s founder, “I felt like I was seeing dollar signs.”

Bergdorf Goodman is building special departments for Saint Laurent in its men’s and women’s stores, which are expected to be completed this month.

“We’re very eager for the business to be as big as the perception of the brand,” said Joshua Schulman, the president of Bergdorf Goodman.

As is PPR, the luxury conglomerate that owns Saint Laurent and wants to make it as big as its Gucci business. The company, which will be renamed Kering in June, releases its quarterly earnings next week. Mr. Slimane’s fans and detractors alike will be paying close attention to the performance of Saint Laurent, given what is clearly a big investment in the label. They will also be judging the strategy of François-Henri Pinault, the chief executive of PPR, to recruit designers who will not only be involved in the creative side of a label, but in its commercial aspects as well.

To that end, the company plans to open new flagships designed by Mr. Slimane next month in Paris, on the Avenue Montaigne, and in New York, at 80 Greene Street, once the Helmut Lang store, with a sleek amalgam of white-streaked black marble and black-streaked white marble.

FIVE YEARS can be a lifetime in fashion.

Mr. Slimane became known shortly after Mr. Bergé hired him in 1996 to revamp Saint Laurent’s men’s wear. His skinny suits were so successful, they foreshadowed an era of “slim-fit” fashion. But after Saint Laurent was sold to Gucci in 1999 and Tom Ford came into the picture he jumped to Dior Homme. Mr. Slimane went on to become a star there. At the same time, Saint Laurent, with more than 100 licenses, was losing tens of millions of dollars a year. It was not until 2010, six years into the tenure of Mr. Pilati (a former assistant to Mr. Ford who took over in 2004 after Mr. Ford resigned in a creative dispute), that the house again made a substantial profit.

After several years of expanding Dior’s men’s wear, however, Mr. Slimane asked for his own label and demanded too much control. In 2007, he was rebuked by Bernard Arnault, the chairman of LVMH, who told him to come back to reality.

Instead, Mr. Slimane moved to Los Angeles to pursue his interest in photography. And with little explanation he broke ties (some would say he burned bridges) with many of the people who had supported him at the start of his career. Friends who had known him for years were suddenly shut out, or shut him out. Karl Lagerfeld, who included Mr. Slimane in his entourage in Paris, stopped wearing his clothes. Jean-Jacques Picart, the consultant who encouraged Mr. Slimane to become a designer in the first place, said in an e-mail message, “I can’t say anything about Mr. Slimane, and to be very honest, I don’t want to.”

Still, Mr. Slimane coveted the job at Saint Laurent, and, according to those familiar with the negotiations, he encouraged rumors that he would eventually replace Mr. Pilati. Those reports haunted Mr. Pilati for years. Mr. Bergé also became more vocal about his displeasure with its direction after the death of Mr. Saint Laurent in 2008. Mr. Bergé said he never actively campaigned for Mr. Slimane, but when Mr. Pinault finally told him he was giving the job to Mr. Slimane, he was, of course, “very, very happy.”

But when Mr. Slimane returned to Paris, he faced a frosty reception from an industry that has devalued the role of the star designer. Many editors resisted what they saw as diva behavior, like giving only standing tickets to some esteemed guests, from a designer who was still untested in women’s wear. Few could claim to understand his approach when he showed a debut collection at the Grand Palais that looked merely like Mr. Saint Laurent’s greatest hits. Lisa Armstrong, in The Telegraph, wrote that “what was most surprising was that it was so unsurprising.”

At his second women’s show last month, a fall collection that closely resembled Courtney Love’s “kinderwhore” style of baby-doll dresses from the ’90s, some guests openly laughed, dismissing the grunge-era looks as worthy of Topshop, not Saint Laurent.

Those in Mr. Slimane’s camp, however, argue that he is less interested in critical opinion than what is happening with styles among the youth culture of Los Angeles.

“Hedi has a very specific thing he does and that’s why they brought him in,” said the singer Sky Ferreira, who met Mr. Slimane on a photo shoot a few years ago. “When people talk about him changing Saint Laurent, I don’t really see the problem. Because you can actually wear it?”

That is the crux of the argument. In the Saint Laurent showroom, the runway clothes appear well made and priced for a luxury customer. A tartan dress has individually sewn panels of black mesh between what on the runway looked to be simple pleats, and a band of embroidered crystals at the waist. A mohair cardigan is lined with silk. And leather minidresses that looked like nothing in the show are actually made of panels sewn together with seams that trace the Mondrian-inspired lines of a Saint Laurent dress from the ’60s. The sweaters will cost from $1,500 to $2,000; dresses from the spring collection have ranged from $1,990 to $3,990.

FROM PPR’S PERSPECTIVE, Mr. Slimane is doing exactly what the company wants, engaging in the commercial side of the business, including store design, and communicating directly with younger customers online.

Paul Deneve, the chief executive of Saint Laurent, described the change as a “complete overhaul,” from store concepts to shelving.

The remaining question is whether customers will see things differently than the critics.

So what if the reviews were dreadful? This was more or less what Mr. Slimane had expected. Mr. Bergé said that the two had discussed the reactions and compared them to those faced by Mr. Saint Laurent with his famously scandalous 1971 collection, which took inspiration from 1940s flea-market fashion. The groundbreaking fashion critic Eugenia Sheppard described it as “frankly, definitely and completely hideous.”