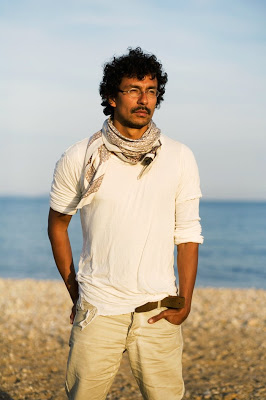 Haider Ackermann was born in Santa Fe de Bogota, Columbia in 1971. He moved to Belgium in 1994 to study at the fashion department of the Royal Academy of Antwerp. After working as an intern at John Galliano's Paris offices, Ackermann became the assistant to his former academy teacher Wim Neels and worked on the Belgian designers men's and womenswear collections. Following strong industry encouragement, Ackermann presented his first, self-financed women's collection in Paris for Autumn-Winter 2002. Ackermann was hired as the head designer for Ruffo Research, commissioned to design two collections (Spring-Summer and Autumn-Winter 2003), while continuing to produce his own line.

The excerpt is quite old and taken from Showstudio.com.

Haider has had quite a nomadic life and his travel and experiences have a lot to do with his sense of aesthetics. One of the more encouraging figures in the early half of his career was none other than Raf Simons, who supposedly reffered him to industry affiliates(Ruffo research?) as he was impressed with Haiders talent.

Haiders business is under the wing of Madame Ann Chappelle, of BVBA 32, who also produces/manages Ann Demeulemeester.

Haider seems to impress public season after season by his ability to find almost perfect balance between structured and fluid elements that are evident in his sharp-padded leather blousons artfully draped at the waist, worn over his beautifully convoluted jersey dresses and finished with butter soft stretch leather/suede leggings and towering wedge-heel hybrids. Nomadic warrior-godesses who seem to fade into their surroundings in their palette of midnights,smokes,leaf,desert browns,and murky purples.

Although some of the head to toe looks might be a bit too severe/austere for some women, he offers some beautiful seperates that would integrate beautifully into a wardrobe of Rick, Ann and other contemporary 'avant-garde' labels.

Haider Ackermann is a designer who prefers to shun the limelight

Haider Ackermann is looking for new avenues to explore, as reflected in a more austere, masculine aesthetic. And suddenly the world seems full of possibilities for the demure designer, writes Divia Harilela I love my work but I'm not one of those designers who needs to be noticed," Haider Ackermann confides.

Many would disagree. In the past few years the designer has gone from an emerging talent to a fashion star that everyone wants. Right in the middle of Paris Fashion Week, the Haider Ackermann showroom is packed. Buyers are busy filling orders, while models navigate the tiny aisles dressed in floor-sweeping coats and tailored separates. In the corner sits a pensive, solitary figure, quietly observing the scene around him. He looks out of place among the glamazons with his dark unruly hair, rounded spectacles and yards of fabric draped around his neck. It's only when people greet him excitedly that you realise that this is the man behind the elegant creations that line the racks.

"Now that my show is over I just want to escape. Being a designer is so different now. I don't think it's necessary to show yourself everywhere, or be a part of everything. This is not something that intrigues me. I don't understand things like Instagram. Why do you need to keep the audience updated about your life? I don't see the point. Who would be interested in my life in the first place?"

Many would disagree, especially in his case. Ackermann's name has often been bandied about in recent years, especially when there's been an opening at a big fashion house. First it was rumoured that Martin Margiela asked him to take over his brand when he retired, then he was apparently up for a role at Givenchy. In 2010 Karl Lagerfeld famously told Numeromagazine that Ackermann would be ideal successor for his job at Chanel. When Galliano was ousted from Dior, the press insisted that he had the job until it was announced that Raf Simons had taken the role.

"My name was placed with so many houses - it felt like I had many lovers. At a certain point it was annoying as it was disrespectful to other people. I found it hard, because everyone had something to say.

"It was so sad when Mr Galliano left Dior. I would love him to come back because he is the person that made me dream. Not many people can do that. If people carry us away and make us travel with our minds it's such a luxury these days. We are not able to do that any more," he says.

Travelling has been a big theme in Ackermann's life - both personally and in his collections. Colombian by birth, he was adopted by French parents whose work took him to exotic places such as Africa, where he was raised until the age of 12. It was his memories of women in countries such as Ethiopia, Algeria and Chad that sparked his fascination with fabrics and draping.

"I was always in those countries where fabric played such a huge role. Women were always wrapped up in metres of fabric or covered and hidden behind it, so it was also very mysterious. It was more the curiosity and the movements of fabrics that I was interested in. It was the mystery that lured me in," he says.

At 17 he moved to Amsterdam, before ending up at the Royal Academy of Fine Arts in Antwerp to study fashion (he said he chose the city because he was in love). Unfortunately, the school's regimented schedule didn't suit him, and he left early even though his tutors, including Raf Simons, recognised his unique talent.

"I never decided to go to school and neither did I finish it. People ask me all the time when fashion came into my life, but things just come to me and I don't question it. It's difficult to do interviews, because I am the most boring person," he says, jokingly.

In 2002, he launched his own collection in Paris with a small show. He forgot to invite buyers but that didn't stop industry insiders such as Lane Crawford fashion director Sarah Rutson from attending and snapping up the collection.

From the outset, there was something beguiling in Ackermann's languid draped silhouettes which featured an elegant yet edgy mix of sculpted leather jackets, trailing blouses and androgynous tailoring. You could sense wanderlust in his exotic shapes that brought to mind Japanese kimonos or robes worn by women in North Africa. Then there was his amazing sensitivity to colour with a palette that ranged from rich desert hues to vibrant jewel tones.

His collections are made all the more evocative thanks to his emotionally charged presentations. Ackermann composes his shows like a musician, often starting with a slow tempo before reaching a crescendo.

"The emotional connection in the show is the music, the lighting, the hair, the make-up. When I start a collection it is part of a whole fantasy. I fantasise about her life - clothes are just part of the process. Some designers concentrate on the clothes and you can see it, like with Rei Kawakubo. But for me perhaps it's more about a global atmosphere and feeling," he says.

It makes sense then, that Ackermann starts each collection with a story, preferring to write words in a notebook rather than sketching. This approach has resulted in a woman that is strongly connected to him and his personal life.

"I think she has become more mature, and is now closer to me than she's ever been before. Before you are in search of yourself and so is the woman, but now I feel I understand her more. It's become less complicated to dress her. She's more in my family now. At the same time I don't know who I am, so how can I describe her?

"The egocentric in me means my work relates to my private life, so sometimes you will see lots of colour and other times it's different. I know I am searching for elegance but to define that woman is not interesting. It's more interesting to explore her," he says.

This exploration came to a head in his recent autumn-winter 2014 collection, which is more austere than past collections. Free of his usual drapes and twists, Ackermann stripped everything down by including more masculine tailoring in the form of wide-legged trousers and floor-sweeping coats. The palette was subdued with shades of grey and taupe while he also introduced knitwear and easy pieces like the funnel neck grey jumpsuit made from a menswear fabric.

"This one started with colour then it changed. I wanted simplicity, soberness, purity. I wanted her, in her masculine attitude, to find some graciousness. I was searching for the word grace - masculine is always heavy with strength and force. I really wanted to have this heavy feeling and in between there's this lightness. It's easy and feels comfortable. Sometimes I am scared she will be too bourgeois," he says, laughing.

Interestingly, Ackermann says that his woman changed most when he relaunched his menswear line. His first foray into menswear came in 2010 at the Pitti Immagine trade fair in Florence, but the line disappeared soon after. Last June he decided to make a comeback with a collection that featured silk jacquard bomber jackets and waistcoats, in his signature jewel tones. While there are connections between both lines in terms of aesthetic, Ackermann says he prefers the menswear.

"When you are working with men it's more an exercise of style because you are focused on the clothes. I tried to choose fabrics that were too heavy for me, that I wouldn't wear, to make it different and challenging. Men's is nice - it's newer and everything is much smoother. Even at the presentations the crowd is different and more relaxed. For me I feel I can breathe," he says.

This breathing space has done wonders for Ackermann as his collections have grown from being cult favourites with editors to a commercial success. He boasts a mile long list of stockists worldwide, including Joyce in Hong Kong, who will be hosting the designer's trunk show next week Wednesday. The obvious next step would be more lines or even a store.

"I want to know more about the business; why one piece sells more than another. My favourites always sell less.

"Suddenly this season, I am also thinking about opening stores. Another thing I would love to explore is haute couture. I know where I'd do it, the music, what it would look like. I don't forget these things - they haunt me every night. Sometimes I feel I have a pile of ideas that I am keeping aside because I can't use them [for ready-to-wear]," he says.

With the future holding so many possibilities, one wonders what sort of legacy the Ackermann is looking to leave behind with his work.

"I won't be remembered. We have amazing designers like Cristobal Balenciaga, Coco Chanel, Madame Grès - those are people to remember. I am living in the moment, doing what I like to do, searching for something, and clothes are the way I do it," he says.

"I don't know what else to do if I wasn't a designer. I would have loved to be a ballet dancer. I like any kind of job in which anyone can escape. I do this job to escape from reality. To escape a certain part of myself."
_________________
We make SENSE, not clothing
bitslabo.fr